The Life and Death of MadCarter’s

madcarters.com began online as a Hippie store that soon enough had a Hemp jewelry focus. It was the culmination of the preceding couple years of a pal and I setting up shop online using a completely unrelated domain name I had available because the site for it was not finished, and a store was better anyway.

I was working on a tutorial site for Windows when pal said – OK, then, let’s do it. So I made a site real quick (2 months) for our store and we launched it at ifthenbut.com. It was ridiculous. But I had a name and a mascot in Fuega!, our store name, and she was a real dog.

I bought the fuega.com domain soon after and had a brand new site ready for it. It all fell into place. Before long pal and I were no longer together in the venture and I weaned down the product and expanded the scope of the site. I made executive decisions by my own damned self, and it was

I felt weird having a store named after a fella’s dog; sweet, tho, the mascot – and I wanted to break away from that, to disassociate with Fuega! as my store and to emerge anew with my own thing. I thought madcarters.com kicked ass for a lot of reasons (mostly the one: kids) so I bought it and I’ll keep it forever, if I can. I made a new site for it, filled orders and made jewelry and had a ton of fun and by the time a year was over madcarters.com had outgrown itself completely.

In ’03 I decided to build with one of those ‘web-site-in-a-box’ scripts. I had a LAMP setup at home and had played around with a bunch of them, and I loved them. Mambo was cool and allowed me to crank out content and add functionality quickly so I was able to build a larger and more inclusive site.

madcarters.com couldn’t help but to morph away from its online shop heritage in ’04 into a Hemp Omnibus site because of this. It still had the hemp jewelry store on it but it was getting too biggish with intent and needed to go a different route. It morphed by default and MadCarter’s had become a thing.

Running php7.3 now so I can’t re-host these 2 sites

Concurrently, I had been into Linux for a while and became quite proficient on the system. Then some cack in a forum said – you should make a tutorials site. And that’s what ifthenbut.com was originally going to be for! So I thought it was the best idea ever and it’s what did. Of course that meant that madcarters.com was finished being a Hemp Omnibus site and was now going to be a Debian tutorials site. It was May ’05. MadCarter’s was dead.

debiantutorials.org was registered in may ’06 to fix that problem but it was too late. I bled it out. That’s three times intent change on the same domain. I left its withered husk hosted but unused for years. It was simply a placeholder site between ’06 and ’14 until I used it as a web design/marketing site, which was a mistake. Way bad timing for that and it was over quickly.

In ’15 it became this site and it has basically sat privately on the web periodically being updated by my frivolous stream-of-consciousness. It shall remain thus evermore. 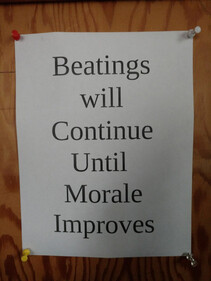 If offered courage or money, build a fortress should you choose wrong. The style in which your second foot follows the first reveals the leakage rate of your soul. At least stay in time, or accept your place in hell. Word.

I play a mean bass. Your ears would definitely say that mean was the right word.