Back in the woods when I bought my bass that one time I knew I’d need some sort of tuner mechanism, because, what the hell did I know from notes and whatnot? I knew tuner because those high school pals were always drilled down into theirs pre-rippage, when they got some confidence. I knew tuner so I bought this handy little electronic tuner and I knew I was done. Batteries last forever in it, which is cool. 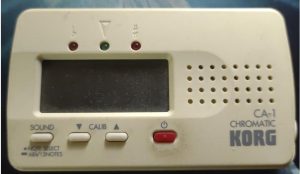 Then I goto A, give it a pluck, and rotate tuners as needed to land it at 90, too. I mean, who doesn’t do this? It takes all of 40 seconds and you’re in. Handy, thoughtless, hack shit. How much do I suck?

That one time a few years later, in the early ’90’s, I got myself a tuning fork. It sits in the pencil tray in the big green desk drawer. Sometimes, when I’m tuning my bass, I look right at it pleasantly thinking of candy and bubbles and grass and sunshine and all manner of nothing at all related to sound. Then my eyes find themselves trained back on that needle and the glimmering A waiting to be used sits among the other relics; wasted. Forgotten.

Pfft. I grabbed it this morning after I put the electronic tuner up, when I was thinking to myself about the longevity of batteries in it. They last forever…I couldn’t find the box so I just laid it atop some other crap in the big green drawer and grabbed that A from the tray. I rolled the end in my fingers and laughed to myself a little. I felt that I looked like richie cunningham that one time, when he was awash in bashful, tilting his head just so, downing his chin, smiling…I flicked the end of the fork and held it to my one-good-ear. And there was A.

I made A. I mean – I know A. You know it, too. Shit. It’s one note. You can know one note. In my head when I play I’m going next to the sound, not the architecture, pattern, you know – the rule. You know A. So I hummed out A and pulled open on Lynne. Sho’nuf, that’s A. I went ’round and hit a couple A’s on the a,d, and g strings, too. All of the A’s were A. She was A-tight. It was beautiful.

Thing is, I don’t even need that sexy tuning fork. Neither do you. You know A. Just make A. Hum it and tune your baby. All you gotta know is the one note. I have an A, so I know A. I mean, you know, I know what C# sounds like, but, I’m not whipping that out any time, underwater, drunkasfuk, on my knees in a hurricane.

Tuning forks, man – a little bit of that magic sound in your one-good-ear a few times and you know it. Now it’s portable, you can whip it out anywhere. Tune your baby. Imma go play.